Visual Basic 2.0 was quite a leap forward; it improved language features, the IDE, and numerous other things. One of the biggest changes was the introduction of the “Variant” Data type. A full list of new features, from the Visual Basic 2.0 Programmers Guide, with annotations on each by me.

The Three Visual Basic 2.0 Manuals in their native environment of a random Wooden Table. The “Professional Features” guide is about twice as thick as the other two. Note the use of the old cover style that was typical of MS Documentation of the time. 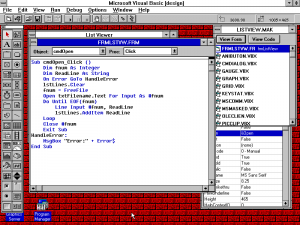 As we can see above, Visual Basic 2.0 adds Syntax highlighting over VB1; an additional side effect of this is that the colours can also be customized. I recall I was a fan of using a green background and yellow text for comments to make them stand out, myself.

On a personal Note, Visual Basic 2.0 is dear to me (well, as dear as a software product can be), since it was the first Programming Language I learned and became competent with to the point where I realized that I might have a future with software development. Arguably, that future is now, but it hasn’t actually become sustainable (I may have to relocate). But more so than this is the fact that I was given a full, legal copy of the software. This in itself isn’t exceptional, but what is is the fact that it had all the manuals:

Dog-eared, ragged, and well-used, these books- primarily the Programmers Guide and Language Reference- became the subject of meticulous study for me.

One thought on “History of Development: Visual Basic 2.0”

Hi there outstanding website! Does running a blog such as
this take a massive amount work? I have very little expertise in coding however I had been hoping to start my own blog soon.
Anyways, should you have any ideas or techniques for new blog owners please share.
I understand this is off subject however I simply needed
to ask. Cheers!