A lot of older games and software have received source ports over the years; furthermore, a lot of those older titles have had remakes or revisions that improve the underlying engine, adding features that were not available at the time the game was created. These capabilities tend to start with Source ports which add additional features, and sometimes a wild source port appears  which is dedicated to introducing modern graphics features and/or high resolution textures. There tends to be two camps when it comes to the “best” way to replay these older games. There are those who argue that these modern source ports “aren’t the way the game was intended to be” and violate a sacrosanct code of ethics regarding playing games, and there are those who think if you can make something look or play better, why not. I fall largely into the latter camp. My logic is that if the capability had been there then the games were more likely to have the enhanced capabilities that we find in source ports, and the lack thereof isn’t a direct indicator of those aspects going directly against design intentions. Furthermore, I reason that if we go down that route about “intent” then we should be forcing many of these games to run in very low resolutions or to struggle with low framerates, in order to match the typical system capabilities of the era.

A few specific titles come to mind when it comes to these sorts of titles. There are plenty of source ports and configurability that allows players to be “pure” and entirely consistent with the original titles, as well as those which appeal to those who want to replay the game with a bit more flair.

Doom may not be the earliest game to receive this sort of treatment- as Wolfenstein 3D also has seen some similar things- but it was the first “big” one. Doom is one of the earliest examples of rather wide modifications of a game, partly because of how it was structured. This led to an endless supply of WAD files that you can download and play, particularly those constructed for 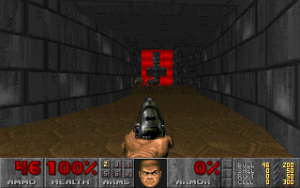 Doom II. The original DOOM as well as Doom II was an MS-DOS game which ran on, unsurprisingly, MS-DOS. This meant that playing it on later systems, such as Windows 95, 98, and particularly 2000 or XP, meant that you had to deal with quirks from it being an MS-DOS game. Source ports changed this; by taking the original source and porting it to these newer platforms, the game could be run on any number of other platforms that were distinctly not MS-DOS. It wasn’t long before these source ports started to include additional features. For example, Doom Legacy was a source port which, among other things, could have the blood splats that flew off of enemies stick to walls and floors. Other source ports had similar features, extended the engine, or added their own capabilities. Nowadays, there are large modifications to the base game such as Brutal Doom or Project Brutality which significantly alter gameplay. You can use high resolution 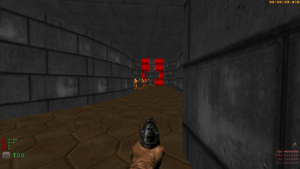 textures and there are even Models that you can use to replace all sprites in the games. Traditionalists haven’t been left out; Chocolate Doom is a source port that runs on pretty much any platform- even MS-DOS itself- which seeks to keep the gameplay as original as possible.

One thing I’ve noticed in particular is that it seems to have it’s own OPL3 Based Music synthesizer built in, whereas other source ports use the system MIDI synth. I’m personally partial to Project Brutality via gzDoom, myself, as I feel it makes playthroughs more interesting and unpredictable because of new, unique enemies and weapons as well as enemy and pickup randomization. I also like to use a tweaked version of Oblige, ObHack, which is a WAD generator which I then modified (the LUA scripts) even further to increase enemy, ammo, and health amounts to ridiculous degrees, though that’s not really here or there. 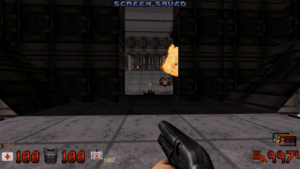 Duke Nukem 3D was the 3D followup to, well, Duke Nukem 2. The Misogynist main character and his one liners was right at home in the late

90’s, and it received an expansion (in the form of the Atomic Edition, as well as a Plutonium Pak, which basically changed a normal install into 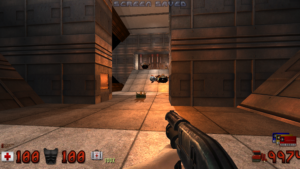 the Atomic Edition) and several unofficial add-ons such as “Duke it out in D.C”; Like Doom, it also had a vibrant community of level creators, kickstarted, somewhat, by the original CD including the Level Editor, BUILD. It has it’s own share of Source ports, but unlike Doom, there is one that stands head and shoulders about the rest- eDuke32. This port has pretty much any feature you could possibly want; including a brand new 3-D Renderer that allows for not only high resolution textures and models, but features like dynamic lighting, models, and various new image maps like normal and bump maps being supported.

Quake ended up being quite a different game when released then it was originally advertised in Commander Keen Episode 2: 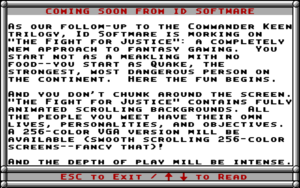 The “Quake Preview”, then called “A Fight for Justice” found in Commander Keen, Episode 2.

Instead of what was presented here, by the time of it’s eventual release, the game was almost, one could say, a Doom clone; the gameplay was very much the same as Doom, with a slightly 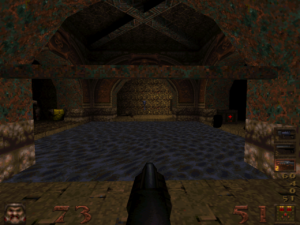 Quake as seen via the relatively faithful Makaqu source port.

different story surrounding it- rather than a Space Marine fighting your way through Hell’s demons, you are fighting interdimensional demons. Of course Quake introduced a brand new, fully 3-D engine, which was one of the earliest implemented as well. At the time, it’s graphics 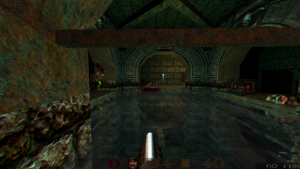 the same location in-game as seen in the enhanced Darkplaces Source Port.

capabilities were rather ground-breaking. While the DOS game normally used CPU-based Software rendering, paired with support for VESA standard resolution support, You could also get a version which used OpenGL,  (or even a variant which internally converted OpenGL calls to Glide for those users with 3DFX Cards). Quake, Like Doom, was eventually Open Sourced. as a result of this, it, too, has seen innumerable “Source ports”; from egoboosting <name>quake.exe versions where people just slap their screenname or first name in front and add a few features, to full-fledged, complete reworks of the base engine. I’m particular to Darkplaces myself. This was actually part of what spawned this entire post, which is that when I posted a screenshot of Darkplaces with “all the trimmings” it was met with some lukewarm responses about how that “isn’t how it is intended”; Naturally, their recommendation for the “proper” way to play was another source port, which I think I’d most liken to Chocolate Doom, Makaqu.

Quake, a game about fighting interdimensional demon hordes, naturally spawned a sequel where you play the role of a space marine in a retaliatory attack against an Alien race. Alright, so it wasn’t really a sequel in anything but name. Even so, the gameplay is very similar. 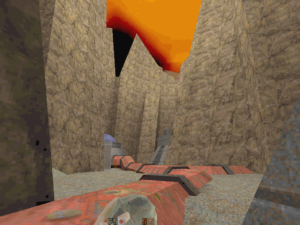 And, we see much the same “aftermarket” support appear long after the game had fell from the public eye. One can find enhanced source ports with dynamic lighting and even high resolution texture packs available for it, such as Quake2XP, r1q2, Berserkerq2.

modern systems. A lot of older games that were held onto more closely by their manufacturers require very specific hardware configurations and setups, or have compatibility issues. This presents a problem for playing those titles today without actually procuring a system built specifically towards those title’s particular limitations. Open Sourced commercial games of “yesteryear” means that people who want to give the game a replay on their new PC can play it without major compatibility concerns as well as crank visuals to 11 if they so desire. 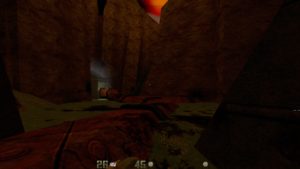