The deprecation of Microsoft Paint

A while ago, it came out that Microsoft Paint would be deprecated going forward on Windows 10, replaced, instead, with Paint 3D. There have been loads of articles, forum threads, and general griping about this across the Internet. Nonetheless, Paint is hardly the first “casualty” of Windows as it moved forward; nor is it’s loss, realistically, a big one.

“Paint” existed in some form or another dating back to the original Windows release. Like many parts of Windows, it was based on an existing product, but stripped down. In this case Windows Paintbrush was effectively PC Paintbrush 1.05 for Windows but stripped down so as to not compete with the full product. 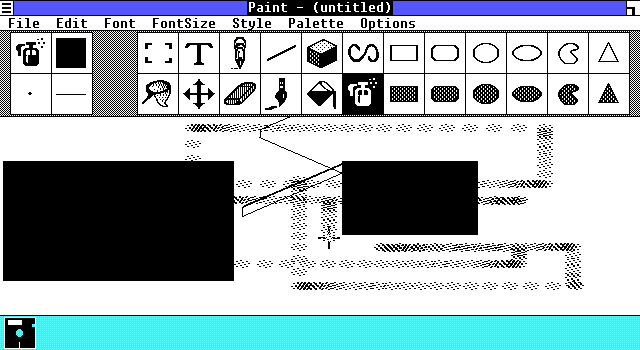 Aside from a smaller set of tools, it appears that another limitation of the included program is that it can only work with monochrome bitmaps. For the time period, that isn’t a surprising limitation though- The Apple Macintosh’s MacDraw program had a similar color limitation. 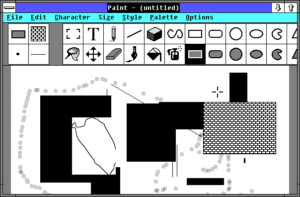 Windows/286 didn’t change the included PAINT program very much- I wasn’t able to find any significant differences myself, at least. it seems to have the same limitations. I wasn’t able to get Windows /386 to work however I presume PAINT is the same program between them, being that the major difference is enhancements for the 386. 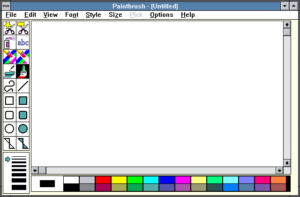 It was with Windows 3.0 that PBRUSH was effectively created. While still seeming to be based largely on PC Paintbrush, the Windows 3.0 version, aside from changing the program title to “Windows Paintbrush” from “PAINT” as well as the executable, also redesigned part of the User Interface. Interestingly, this interface is more similar to the more complete PC Paintbrush product as provided on Windows /286, but of course it did not provide the full toolset of the commercial product either. 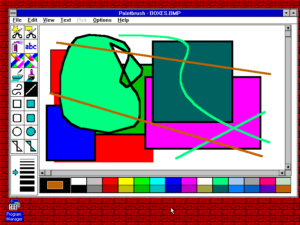 PBRUSH didn’t see any significant changes from Windows 3.0. It still had a number of annoying limitations that plagued previous releases; in particular, tools couldn’t work with data outside the visible canvas. This meant you couldn’t even paste a screenshot into the program- It would be cropped. You can see this below- this is after performing a floodfill on the outer area of the above, then scrolling down- the exposed canvas was not affected by the operation. 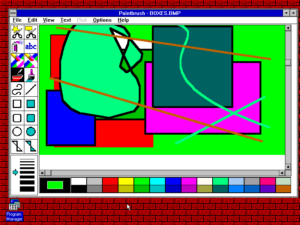 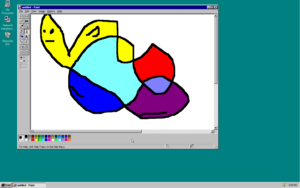 Windows 95 saw PBRUSH deprecated in favour of MSPAINT; Not just deprecated, mind you- but altogether removed; however, you could still invoke PBRUSH, due to a new “App paths” feature of Windows. This capability exists to today- Like Win95 there is no PBRUSH.EXE in Windows 10, but running PBRUSH will start MSPaint, as it has since Windows 95. The new Windows 95 version of Paint is now “Microsoft Paint” rather than “Windows Paintbrush” and sports a new executable as well. It also redesigns the interface to adhere to the new “3D” style that Windows 95 introduced, as well as making use of other Windows features that had been enhanced; for example, while you could edit colors in the older Windows Paintbrush, the program used a set of three sliders for that customization. Windows 95 added a new Custom Color dialog, which Microsoft Paint made use of for customizing the palette entries. Thanks to how that dialog worked it meant you could save several custom colors outside of the normal palette and swap between them, too. It also adds a Status bar, which was coming into it’s own with Windows 95 as a convention; This included “tip” text appearing on the left as well as other information appearing in additional panes on the status bar. 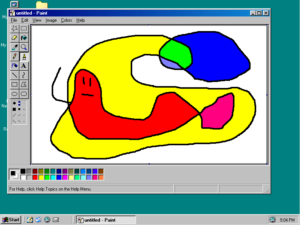 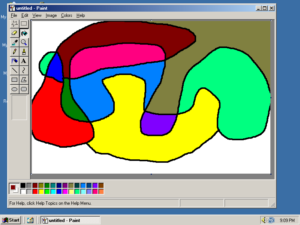 MSPaint on Windows ME

The Windows ME version of MSPaint appears to be identical to the Windows 98SE Version, however, the executables are not identical- I’m not sure what difference there might be beyond the header indicating it is for a different Windows Version, though. It’s here for completeness. 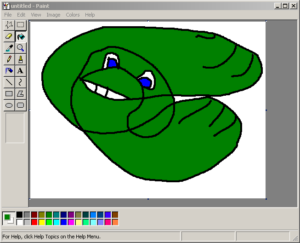 Another entry for completeness as, like Windows ME, I cannot find any differences between it and the Windows 98SE release of MSPaint. 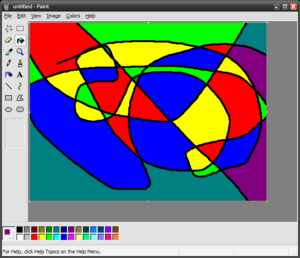 Windows XP introduced a few major revisions to MSPaint. First, it could acquire information from a Scanner or any TWAIN device (Such as a digital Camera). Moreover, it now had native support for JPEG, GIF, TIFF and PNG File formats, without any additional software installs. 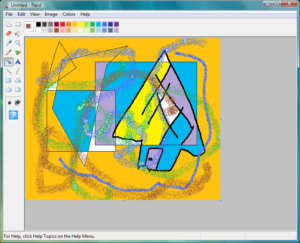 The WIndows Vista release of paint changes the default colour palette, has a set of new tool icons, And Reorganizes some of the UI (the Color palette is moved, for example). It changes the undo stack to 10 deep rather than 3, and saves to JPEG by default- which suggests that it was intended or expected largely to be used for acquiring and saving photos. 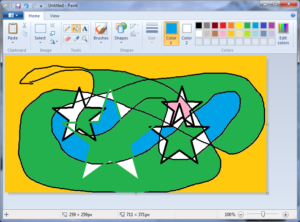 MSPaint as included in Windows 7.

Windows 7 is another major overhaul of the program, on the same level as the change from the PaintBrush program in Windows 3.1 to MSPaint in Windows 95. This redesigns the interface around the “Ribbon” concept, and adds a number of capabilities, brushes, and a few tools. It also now has anti-aliasing. 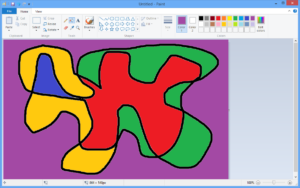 This version is pretty much identical to the Windows 7 release; though there are some minor adjustments to the Ribbon.

Microsoft Paint is now deprecated, but this doesn’t prevent you from using it; even when it is removed from the default installation, it will still be made available as a free download from the store. You can also copy/paste a version of paint from a previous Windows 10 install to avoid dealing with an appx container file or any tracking that comes with using the Windows Store, if desired. I think the fuss over this change is a bit of an overreaction. There are plenty of other free programs that can accomplish the same tasks and while it is a bit annoying to have to download them, Windows will still include Paint 3D which should be capable of the same standard tasks people want the older Paint program for, such as screenshots. 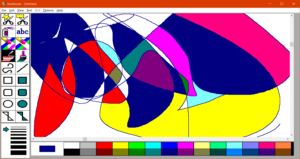 The old PBRUSH application running on Windows 10. It’s a Miracle.

What is this witchcraft? Windows NT 3.51 was 32-bit, but was based around Windows 3.1, so it got a 32-bit version of the same old PBRUSH program from Windows 3.1. That can be copied from an NT 3.51 install and run directly on Windows 10. Pretty interesting- Though of arguably limited usefulness, beyond putting it at the end of blog posts to pad out the length for no reason.