Nonsense titles are all the rage.

Over time a lot of game franchises have appeared and many of them have many installments. Sometimes, you’ll try a much later release in the franchise and find you quite enjoy it, and decide to hop backwards- and see what you missed in previous ones.

As one might already guess, That’s effectively what I did and what I aim to discuss here. Specifically, a few years ago, for some reason, I wanted a new “thing” and decided to get an XBox One. Being that I was interested in a more complete racing game experience than Project CARS or Assetto Corsa seemed to provide- both of which still felt like Alpha-quality software particularly in terms of their menu interface, I decided to get the Forza Motorsport 6 Bundle/Edition. I actually hemmed and hawwed on the decision for a while because it was an awful lot to throw down on something I had difficulty actually justifying, particularly as I had never even heard of the series before; But I tossed my chips in anyway.

It comes as no surprise given what I’ve written here that I ended up quite liking the game. Which actually was a surprise to me since I’m not generally very car savvy or interested in cars. It’s worked out so far to about a dollar an hour of total playtime just with that one game.

Eventually the “6” got me thinking about the predecessor titles. So, following my typical style,  I went overboard and got them all: 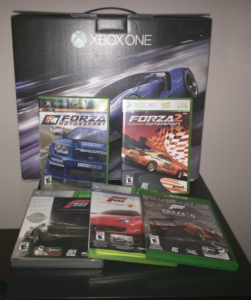 So far I don’t have any regrets; I’ve been playing through the first installment and I think it offers enough of it’s own uniqueness that it’s worth playing. In particular, having never owned the original XBox system before I was intrigued with the system as a whole and in particular the ability to have custom soundtracks. 2, 3, and 4 are for the XBox 360- which I’ve never owned either, so I once again went all in and have a new one on the way, for when I get through the first installment.

It is rather interesting how much variation there is between games that really were designed with the same intent. Ignoring for example graphical enhancements, you have to consider vehicle and even track licensing; As an example the Opel Speedster is available in the Original Forza Motorsport title but isn’t in Forza Motorsport 6; meanwhile settings like the New York Track and Tokyo tracks (among many others) simply are not available in the latest game, which themselves have tracks not available in earlier titles. My hope is that as I slowly make my way through each title each game provides a diverse enough experience that it isn’t too much of the same thing over and over.