I’ve not been particularly partial to Macintosh computers, having gravitated largely towards the somewhat more “open” environment that is the typical PC. However while browsing eBay I saw a reasonably priced PowerMac G5 and decided to jump on it. My only experience with Macs is limited largely to the slot-loading iMac G3 and OS 8.6; however, I also toyed with programs like MiniVMac to emulate System 7. (I also had PearPC working somewhat with OSX but it didn’t run very well).

The system itself was not working as-is; it didn’t have a Hard Disk. I threw in a spare 1TB SATA SSHD, and was able to, after some fighting with it, get OS X 10.4 (Tiger) to install to it without issue. I would have gone with OS 9 first (just to fiddle with Classic OS stuff first) but it isn’t supported. Oddly, I found I had to initialize the drive on my Windows System before the G5 could get past the “partitioning” stage.

I’ve been experimenting with the system since. It’s a relatively base G5; it’s only a single core, and it had no Airport for Wifi; as a result I’ve been sneakernetting files over to it via a 128GB USB Flash Drive. I’ve actually been rather impressed with the system- I have a Pentium 4-based system which would be it’s era-contemporary and I’d argue that while both systems are getting long in the tooth in terms of software compatibility, the G5 certainly seems to bear it better, and is incredibly responsive under most circumstances.

I found the two systems about equivalent in terms of playing videos; both can play DVDs just fine, but struggle with 1080p mpeg-4s; reducing the resolution to 480p, however, and the videos will play without any problems. I’ve not put the G5 onto the Internet yet; it lacks the connectivity to do so, as it doesn’t have an Airport card. I got one off of eBay for about 10 bucks which should provide connectivity, and I’ve got TenFourFox, a fork of Firefox, which should work on the system for browsing; so how well that will work remains to be seen. I expect capabilities at least on par with the contemporary Pentium 4 system in terms of performance; which means it should be usable for browsing forums, E-mail, writing posts here, etc. 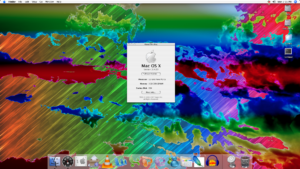 I’ve loaded the system up with a bunch of software I sneakernetted across, for now; It’s got USB 2.0 so while the 128GB drives transfer more slowly than on my main desktop and laptop systems which support USB 3, it’s nowhere near the ordeal that it would be with USB 1.1. The biggest annoyance so far is finding the correct versions of software; software like Netbeans IDE for example had versions which ran on OS X 10.4 Tiger, but I’ve been unable to find the old install files and their archive only goes up to 6.0.1 which requires Java 6 or 7 which I’ve also been unable to install, so I’ve hit a wall there. Mono installed, but doesn’t work due to Library issues; I found a slightly older version (one of the early .NET 2.0 releases of the CLR) but that one just claims there is nothing to install which is odd. Currently it doesn’t have an Internet connection as the system lacked the necessary Airport Extreme (or PCI-X) add-on; however I have one on the way from Ebay; and with TenFourFox (A FireFox fork which ports it to OSX PowerPC) I think it will work at least as well as my Pentium 4 system for browsing. In fact it may work even better; I’ve found it performs very well, with even Photoshop CS2 working only slightly slower on it then Adobe CS5 does on my more modern 4770K i7 system. I’ve loaded it up with useful software such as Office 2008 for Mac and older versions of software like TextWrangler; I’ve also got svn and git on it and presume I can connect to my work VPN which could make things interesting; It would be possible to develop using it by using a text editor and svn (obviously Visual Studio isn’t going to be running on the PowerMac PPC!). I’ve also found it outperforms the Pentium 4 system with games like Quake III:Team Arena which perhaps isn’t surprisingly- the Pentium 4 CPU was a bit of a mess in terms of performance compared to both AMD and PowerPC in many ways.

I bought it as “retro” system as at this point it very nearly is. And yet I’m finding myself impressed with the OS design, something which I never really expected. Naturally there are still some things I don’t like about OSX (I’m not a fan of the traffic light window management buttons, for example) But the responsiveness of the system has been quite stellar.