My most recent acquisition on this is a Tandy 102 Portable computer. 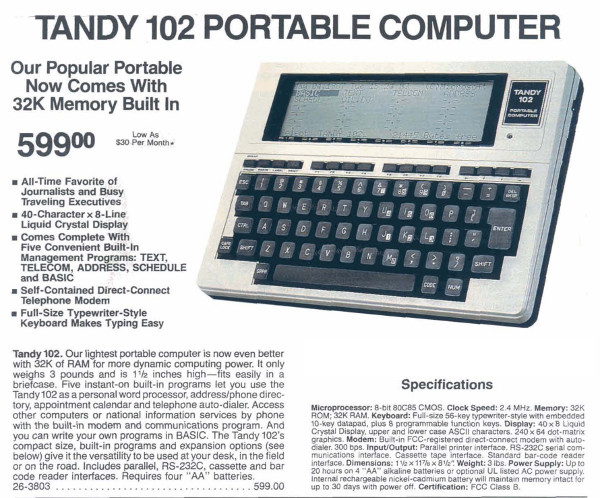 I’ve actually had a spot of fun with the Tandy 102 Portable. Writing BASIC programs on the Tandy 102 Portable gave me both an appreciation for the capabilities of modern languages as well as a more cynical perspective about some of the changes to development ecosystems. With this system you start BASIC and that’s it. You write the program then and there as line numbers, run it, save it, etc. You don’t build a project framework, or deal with generated boilerplate, or designers or inspectors or IDE software or test cases or mocking or factory interfaces or classes or any of that. When it comes to pure programming, the simplicity can be very refreshing. I’ve found it useful on occasion for short notes. usually I use Editpad or Notepad for this but have found the Tandy 102 Portable to be more “reliable” in that I won’t lose it or accidentally close the file without saving. (And power outages won’t affect it either, though arguably those are rare enough to not even matter). The Large text also makes it easy to read (with adequate light). Most interesting was plugging it into the “budget build” I blogged about previously and having the two systems communicate directly through the serial port. I was able to transfer files both to and from the system, though to say it was straightforward would be a bit of a fib.