A few days ago, Microsoft released an update for Windows 10, the “Windows 10 Threshold 2” update. In some ways, this update is practically a new OS version; in others, it is, well, an update. This is definitely Microsoft’s approach moving forward- more frequent releases of new versions, mirroring in some ways Android and iOS updates. How well that applies to desktop PCs, however, is arguably another question. I’m certainly no fan of the approach myself. It is in fact this new approach which leads to the telemetry and diagnostics tracking, which cannot be shut off, that has been so ill-received by Windows users considering upgrading their systems, including myself.

Threshold 2 does address some of my own “holdbacks” on upgrading my primary systems.

Colored Title bars are back

One of my cosmetic issues with Windows 10 was that customization options were removed. To be fair, the trend of removing options arguably started with Vista- the move from the Luna interface and scrapping of the Classic theme in particular eventually phased out some of the more powerful customization options. Windows 10, rather curiously, took it a step further, and effectively forced all Titlebars to be white. I’m not certain of the logic or design considerations behind that decision. It was possible to override this and use your own color but I found the solutions- which involved hacking a theme file- to be less-than-stellar solutions which had their own side effects. With Threshold 2, we are given this ability to customize the colour again. 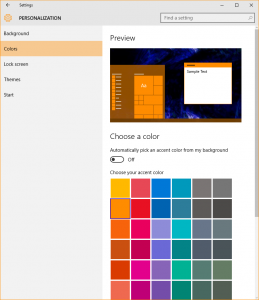 This “New” feature (which is actually an old feature present in earlier Windows 10 builds) is accessed by adjusting the Accent color.

Perhaps even more interesting, is that one can directly access the colour selection options from Windows 8, which allowed customizing the color, rather than choosing a pre-selected palette. This can be accessed by using Start->Run and running “control color” (without the quotes). Quite an interesting if oddly hidden capability.

A lot of the other features are far more meh. I wasn’t really able to find much concrete. I expect quite a few internals may have been revised and other things may have been adjusted based on feedback, though. (oh, and, of course, I’m sure a lot of changes were made based on the wonderful telemetry they received?)