My current PC is nice and fast and responsive and speedy-quick, so I really do not see a new Computer build in the foreseeable future, (to do so would be like wasting the money invested into this one!)

Despite this, I really do like messing with hardware and I have a hankering to build a new computer. I realized that this is entirely possible and not entirely unreasonable- if I create a build designed to be lower-cost but robust, rather than go for top-rung components, not only will I be able to build it, but it could also be a great gift for people who are struggling with older systems that they use lightly.

With that I set about creating a “Budget” build, designed to be cheaper but also reliable. I came up with the following build. I’ll note the components in my current system for comparison. For obvious reasons I have no intention of using this new build as my main system. I’m uncertain what function I will have it used for though NAS server seems as reasonable as any, once I get more hard disk drives for the purpose.

For the motherboard, I chose a Gigabyte GA-AM1M-S2P. This is a FlexATX Board which will provide on-board Graphics and Sound capabilities, which of course means we won’t need a dedicated graphics card (which on their own can be quite pricy). I Chose Gigabyte as a brand here mostly because I have found their motherboards to be quite trustworthy. I’ve gotten a lot of mileage out of my EP43-UD3L Motherboard, which I used for my build that I made in 2008 and is still going strong as my backup desktop system. Furthermore, the AM1-MS2P Motherboard appears to have a number of new features, such as USB3, which are nice to have on a new system, and add value to a build designed to be built down to a price.

For comparison, the motherboard in this system is a GA-Z87X-UD3H motherboard, which is a LGA1150 Board for Intel processors. It has comparable, or superior (IMO) features which you would expect from the higher price point.

Sorry, I mean “APU”- it’s odd that AMD wants to call their Processors by a different name, when they are still really CPUs. For the CPU I was originally going to get a cheap Sempron, but I ended up going a bit better and getting a 2.05Ghz Athlon 5350 Quad Core. The CPU/APU of a system can definitely slurp up a lot of the total budget for a system so the aim here was to keep it affordable. This is part of the reason I chose to go with AMD- that, and I’ve not had one since I had a K6-2, so their current CPU/architectures I’m not familiar with so may as well.

For comparison, my current CPU in this system is an Intel i7 4770K with a speed of 3.5Ghz. Aside from the obviously faster clock speed, I’m not entirely clear how much better it is than the Athlon, though as I understand the Athlon uses an older architecture as well, so I think the i7 is quite a bit better- though if course how my current components from yesteryear which cost a pretty penny compare to components from today that cost a smaller fraction of the price is part of the purpose of this experiment.

As a budget build, 4GB was what I was aiming for. The motherboard supports 32GB but- again, budget build. For this “experiment” I decided to go for 2 2GB Corsair XMS3 sticks. I have 4 8GB XMS3 sticks in this system and several XMS2 sticks in my older machines and they have proven reliable. Nowadays 4GB is sort of the “bare minimum” for a usable system, and- again, budget build means saving money wherever possible, which is part of my purpose for this experiment.

For comparison, I actually have the same type of RAM in this system, but in larger module sizes. Rather than 2 2GB XMS3 Sticks, this system has 4 8GB XMS3 sticks.

A Computer case- or as they used to be called, “Cabinet”, really has two purposes- The main purpose is of course to hold all your computer bits, and protect them from the outside world. The second purpose is to not look awful. A lot of cases typically fail in the second aspect. In the case of the Fractal Design Core 1100, it doesn’t try to be a hero. It’s a very standard case 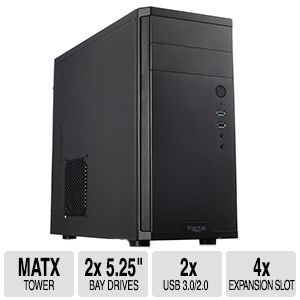 The Fractal Design Core 1100. A nice, basic, case that doesn’t try to be anything special, and provides only what you need. No fancy windows, no goofy flourishes- just a case for a PC. It is also quite affordable- which again, was the entire point of this experiment. I went with Micro ATX here because I felt it might not be unreasonable to try to keep it’s volume footprint down.

My current Case is a Thermaltake G42 Commander, if my memory serves. It is actually quite an annoying case because the drive cages leave so little clearance for the SATA connectors- there are still two SATA cables that I simply cannot unplug that I’ve left inside the case. If I was forced to review the case I cannot think of many positive points compared to even my older Cooler Master Centurion case.

For the power supply I went with a Corsair 430CX Power supply. I figure this system will not need a lot of power as I don’t intend to install a graphics card, and the modular supply will allow me to actually try to do something approximating not-crap cable management. I chose a Corsair unit mostly for the same reason I chose Corsair RAM; I’ve had good experiences so far with Corsair Power Supplies, so decided to continue that success.

What is the purpose of this build, one might ask? I actually am unsure. Currently I expect that I will set it up as a Linux system, or possibly as a dual-boot, but the main purpose is just so I can build a new system for the building itself, and less so about what I will do with the finished product. Furthermore, I find I can never have enough backup systems; I’ll have my current Desktop system, my relatively recent T550 Laptop, my older Satellite L300 laptop, my older desktop system (Quad Core Q8200 etc.) and this new build system. I’m toyed with the idea of a sort of NAS system though I ought to have thought that through more to get a motherboard with more SATA ports (nothing a SATA card couldn’t solve, though). Furthermore, since I aimed primarily for a low budget (rather than performance or capability as I did with my builds so far) It is a good experiment to see just how much value you get from a system that is nearly 20 times cheaper than the cost of a standard IBM PC did when it was first made available (accounting for inflation, of course).