I have a habit of occasionally making exorbinant purchases that I cannot, under normal circumstances, justify. I have been considering a Sound Card as just such an exorbinant purchase for some time. Each time I managed to reason myself out of it. Well, until a few weeks ago when I took the plunge. The choice was between the Sound Blaster ZXR and a card in the ASUS Xonar Range. Xonar seems to be the go to Sound Card, reading reviews online, so, naturally, I went with the ZXR. I chose the ZXR over the ZX or the Z card in the series because I had more money than reasoning skills. If I had reasoning skills I likely wouldn’t have purchased it in the first place, but I decided to make an investment for this Blog… Yeah, that is what happened. 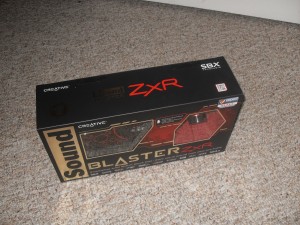 Sound Blaster ZXR Safe in it’s box. This photo was taken before it realized that it wasn’t going to be used by a independent professional, but rather by a bumbling pseudo-enthusiast.

My experience with sound cards manages to somehow cover almost all the technologies. Starting with a ISA 16-bit Sound Blaster card, then a ISA SB AWE32, moving towards a Sound Blaster 16 PCI (which, as I learned recently, is really a rebranded Ensoniq); Then I bought an Audigy SE, because I thought it was an Audigy when in reality it featured no Audigy processor and was just a host-based processing card. Eventually I upgraded to a X-Fi XtremeGamer (before they renamed it- it has the X-Fi Processor chip and actually performed functions in hardware), and stuck with that until recently, when it caused a BSOD (somehow it managed to bork the system despite the WASAPI rearchitecture, oh well). I’ve been using the Motherboard Audio since for this system and it has functioned fine. I had literally no reason to buy a ZXR except to have a new thing, and of course so I could take pictures and share it on this blog for, again, no reason whatsoever. 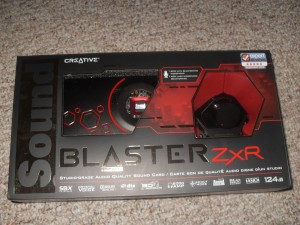 Another Perspective on the pristine box. Notice the Box-like shape. This will become important at no point in this post.

The Packaging was about what you would expect. The transparent windows on the front of the box let you see the card and “Audio Control Module”. The standard smorgasbord of marketing guff covers the box like goto’s in a BASIC program. Inside I found the Sound Card, a daughterboard, a few cables and connectors, the Audio Control Module, a Software disc, and a small foldout manual.

The contents of the box. The key to unboxing is to slice lengthwise starting from the boxes Anus.

Now I had to install the bloody thing. My approach when it comes to building my PC is effectively just making everything plug in, which lends itself to rather messy cabling. And even if I try to be neat I usually end up undoing it at some other point. Generally speaking I don’t exactly sit and admire my build job so it’s not a big issue. I am always paranoid that somehow in the process of installing something I’ll somehow destroy the machine, which is a rather unrealistic fear.

Installation of the card, like for any other PCI Express card was rather straightforward- find a PCI Express slot to use, find a slot to use for the Daughterboard (in this case) and install the card. I ended up installing the DBPro daughterboard right beside it, though I could have also used an unconnected slot cover that was mounted horizontally as well if I wanted to do so. 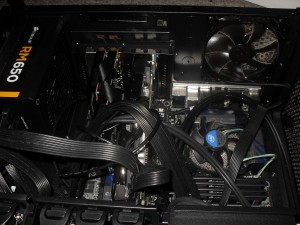 The Card successfully installed. I realized later I could have installed the Daughterboard horizontally in the weird slot that in this image is above the header block.

With the card installed, my Computer now had a piece of it’s rump suddenly festooned with brass and gold-coloured plating. This Sound card in particular uses the big fat TRS audio jacks as part of the actual jack, but the package provides an adapter so I was able to use my current speakers without issue. In the image showing my computer’s rear, We see I have only two slots left now.  Also if I was to purchase a second GTX 770 I would have to do some rearranging to get it installed, since it would require the 16 slot currently housing the sound card. 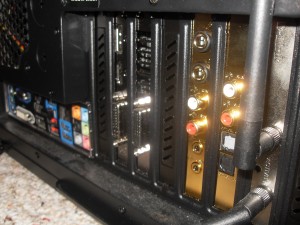 The new connectors the card exposes on my computer’s rump. King Midas himself would be indifferent because he lived in a different time and wouldn’t understand computers without an exhaustive educational program.

As for the card itself, I’ve found it to be an upgrade. I did a direct comparison between my motherboard Audio and the Creative card with my JBL headphones, and I feel like it is a bit better. Was it worth it? Not really, at least not so far. However it has got me thinking about Sound/Music and C# again, in particular, I waxed a bit about whether I should try my hand at using WASAPI directly, which seems doable. I’m quite annoyed with depending on third-party libraries- commercial, non-free and fairly expensive libraries to boot, but have always found the algorithms and data formats of compressed audio rather intimidating. Being able to play WAV streams is one thing, but writing a stream-based decompressor is another. On the bright side, since I don’t plan to go commercial with anything that I’ve used BASS.NET for, I probably won’t have any issues anyway. But I ramble.