With Windows 8s changes, in particular to things such as the Start Button and Start Menu, have raised a flurry of criticisms. This series of articles will go through the process by which various Windows Operating Systems display your applications and how Applications are launched, as well as technical and possible design motivations.

Windows 3.1 was released in April 1992. It was very much a ‘bugfix’ release for Windows 3.0. As luck would have it however Windows 3.1 was the version that ended up really turning heads. It was fundamentally not an Operating System- it was in fact a “Desktop Shell” that ran on top of DOS.

As shown above, Windows 3.1 did not actually have a “Start Menu” as we are so used to today. Windows 3.1’s default shell was “Program Manager”. It organized items into Program Groups; within each Program Group could be any number of Program Icons. Program Icons could launch Applications, or even launch documents. Launching ‘Documents’ would employ Windows 3.1’s relatively simple File Association mechanic, whereby certain file extensions could be associated with specific applications- ‘launching’ a document of that type would cause that program to be launched, with the chosen file’s name as a command line parameter.

No Heirarchy for you

It’s notable that Program Group’s could only contain Program Icons; that is, you could not drag Program Groups within other Program Groups. All icons were 32×32, though different video adapters sometimes used different icon sizes and bit depths (that was fun). Launching an application consisted of finding the Program Icon to launch; optionally, if you knew the file path of the executable you could use File->Run… to directly launch that executable.

DOS: Who gives a PIF?

As DOS and DOS applications were very widely used, Windows 3.1 DOS related capabilities could be considered to Cater to general usage. In fact, one could even say that Windows 3.1’s most attractive capability was that you could run it in 386 Enhanced Mode and run several DOS applications simultaneously. 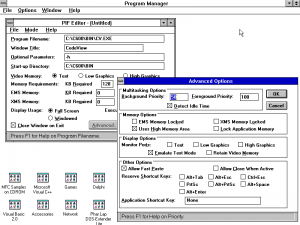 The Windows 3.1 PIF Editor provided a lot of options for executing DOS programs.

Because DOS Applications had a wide variety of hardware requirements, Windows 3.1 used PIF, or “Program Information File” Files to essentially act as shortcuts to DOS Applications. One could imagine this being something of a Precursor to the “Application Compatibility” settings that were eventually made available for Windows Applications in Windows 2000.

In the next installment of this series, we will look at Windows 95, which represented the first major shift in how the user interacts with and uses Windows.