Everybody knows war is hell. That hardly needs any introduction.

However, not many people are aware of a certain intergalactic struggle that earth recently recovered from. This war was against an alien race known as the… well, actually, nobody really asked their names. They were all “hey, earth, we’re on your turf killin your doods” and we were all “hey” and stuff. Anyway we didn’t really know what they were called.

So at any rate, Earth deployed an elite squad- well, actually, they deployed a single ship, code-named Zanac.

Now one wonders- “why just one ship?”

well, back in those days they had a “sprite limit” see, nobody could see more then about 8 (maybe it was 11, I forget) moving objects on at once. Zanac was a experimental machine that allowed the pilot to perceive more then 8 objects at once using a method known as image compositing. The Zanac ship pilot explains:

“It was a philosophical question, back in those days- nobody was even sure if the human mind or visual cortex could handle more then 8 objects in their view at once without instantly exploding, or at least without frame lag. This was rather troublesome for mormons, since they had lots of wives and kids and generally had very oversized families, it made getting family photos rather difficult, with the photographer having the wear an anti-sprite-limit suit and all. So anyway, in the war against these new alien oppressors, we deployed the ship, code-named “Zanac” that included a sprite-capacitor that absorbed sprite information and fed it to the user in smaller, more managable chunks. The first few test runs were pretty promising, excepting of course the pilots heads exploding and making quite a mess out of the ships upholstery. But we didn’t have time quite to finish the tech, we needed to fight the aliens. I do recall my cousin bob making a note in his logbook at the time, about how well his beans were growing in his garden, and I think I said something to the effect of “It’s cold outside” or something, to which he remarke…

Me:You were talking about the Zanac war, and why you only deployed a single ship at a time.

Pilot:Oh yes, I do apologize- so anyways, they sent me on this mission to infiltrate the Alien federation and destroy it- or something. The actual mission was sort of vague, in fact I believe it may have been a yorkshire pudding recipe jotted down on a napkin. In any case, I had no idea what I was in for, in fact at the time I did believe there was going to be a fleet of ships. However, I wasn’t aware of the newest feature they had installed on the ships. See, although the ships’ sprite capacitors could absorb sprites and allow the viewer to see them in more managable chunks, there was a sort of force feedback with any nearby disturbances in the sprite continuum, so there could only feasibly be a single ship in operation at once. When I first heard the news of this, I was rather heartbroken- I couldn’t drink milk for a good week after that.

So they sent me on my mission, Which was pretty crazy right from the start.

Pilot:Well, when I started this weird triangely thing swooped towards me, so I figured I’d shoot it, it being an alien vessel and all.

Pilot: Well it turned into a giant fucking smiley face! I mean, what the hell was going on? I mean, it was the 70’s but a giant smiley face? people, come on!

Me: Actually, we have to satellite footage of this smiley face- refer to “Exhibit Q”. 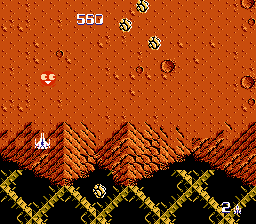 Pilot: So, there I am, in this state of the art machine, fighting a god damned giant smiley weird face. So I decide- well, I may as well shoot it right- I shoot it. And nothing happens!

Me: And this was hardly weak weaponry, I take it?

Pilot: it was state of the art- well, truly speaking it still needed me to find weird blue boxes and grab yellow spheres from inside them for whatever reaso…

Me: wait, what? How does that make sense? you grab yellow spheres from blue boxes, supposedly owned by the aliens, to power up your weapons? Why not just attach a god damned nuclear warhead and just kill them all at once.

Pilot: Ahh, the sprite limit is why. See, if you tried to use a nuclear device in those days, you’d end up spawning too many explosion sprites and cause lag fallout that wouldn’t really do that much damage.

Me: Ok, so you shot the smiley face-

Pilot: I had to shoot it several times- and you know what happened? the damn thing turned orange/red. Like it was teasing me, saying “yep, you hit me, but I’m invincible”

Me: and what weapon were you using for this?

Pilot: for that I was using the blue circlely thing attachment, the silly string main weapon was pretty useless, it went right through them. So then I decided that I was done for, and set a kamikaze course into the smiley face, intent on wiping that god damned smirk off their face- and you know what happened? moment I touched him, he dissapeared!

Me: you’re saying he? How do you know?

Pilot: I was pointed straight up between his legs, He was like a bloody smurf… well, until he turned red, then he was a red smurf. Anyway, so there I am- dumbfounded. Already sure I had seen the strangest thing ever- but then I saw the aliens secret weapon coming right towards me- two concentric circles! It was awful, the pure horror of it all is indescribable.

Me: I can imagine.

Pilot: So there I was, ducking and dodging… shooting my silly string… and then I see an odd glass thing coming up on the horizon- so I naturally try to shoot over top of it at an enemy. And the damned shot hits the glass thing even though it was about a million feet above it in the air. Quite odd. So I continued shooting, and eventually this strange transparent number appeared. So, I of course grabbed it.

me: Wait, why the of course?

Pilot: Well, I’m not sure, it just looked inviting. I mean, can you think of a single time where a number in a square looks dangerous to you? I sure can’t. I can think of times that twigs looked rather menacing from the distance due to the way the light and shadow plays with them, and how our perceptions cause us to recognize patterns and objects that aren’t necessarily there.

Pilot: So there I am, I grab this number thing- and nothing happens.

Me: Were you expecting something to happen?

Pilot: Well, yeah, I guess so.

Pilot: so, anyway, I keep fighting, and I go to use my blue swirly thing attachment, and it is all purple and fuzzy and downright weird looking.

Me: oh, so something did happen.

Pilot: Yes, most importantly, it cut through everything like a sharp knife through goat entrails.

Pilot: Hell yeah it was useful, in a world with giant blue circular smurfs, you need all the help you can get.